If the time has come to rebuild your QA1 monotube shocks, it’s something that can be done in your own shop. However, there are a few extra tools that you’ll need that most common garages might not have. Let’s walk you through the process so you can see what it takes.

The most important thing you’ll need is a nitrogen tank (to be able to fill the shocks) along with the QA1 fill tool. You’ll also need a shock vise and a few other common tools. Around the shaft, you’ll notice a small snap ring that will need to be removed so that you can remove the gland retaining ring. This retaining ring looks like a steel washer. Pro-tip here: Use a binder clip to hold this washer up and out of the way.

On the inside of the shock body, you’ll notice another Hyperscrew in the gland. Slowly remove it. If the floating piston O-ring has failed, nitrogen gas will be mixed with the oil, and oil can shoot out of the Hyperscrew port. With your fingers, push the gland down into the body of the shock roughly ½”, then remove the snap ring that keeps the gland in place.

With firm pressure, pull up on the entire piston rod assembly while rocking back and forth to remove it from the shock body.

Now you can change out the valving, replace seals or do any other upgrades that might be necessary. Pour the oil out of the shock body and use new oil when reassembling, or reuse the oil if it’s new.

Before starting assembly, you’ll want to reset the floating piston. This is accomplished by taking a section of pipe or the end of a hammer and pushing down the bottom on the inside of the shock body. This piston will slide down about an inch and you’ll hear the air push out around it.

The next step is to pour in a specific amount of oil. In the case of the 7” shock in this video, it’s 320ml of oil. If you are working on a 9” shock, the oil volume is 400ml. For oil volume requirements, please consult the TK08 monotube tuning guide and tech manual.

Slide the gland retaining ring back down and install the snap clip to hold it in place. Flip the shock back over and install the hyper screw on the bottom. The best way is to install the screw all the way in, then back it out two revolutions. 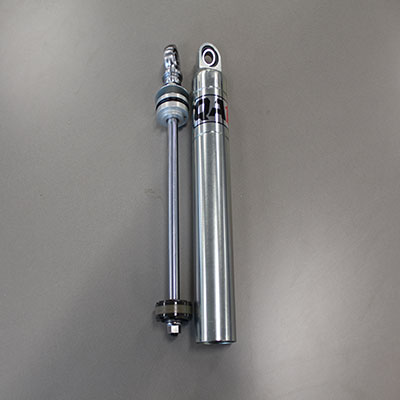 To make sure the shock is properly rebuilt, slide the travel indicator on the piston shaft up, then compress the shock all the way down. It should return to fully extended on its own. If the shock does not fully compress, there is either too much or too little oil. If there is too much, the gland Hyperscrew can be loosened and a small amount of oil bled out. If there is too little, the reassembly process needs to start over, including resetting the floating piston.