QA1 has been honored with a SEMA Global Media Award for its REV™ Series carbon fiber driveshafts, which were recognized for their mass appeal to audiences around the world.

SEMA introduced the Global Media Award program in 2004 to highlight the wide appeal of specialty-equipment products to enthusiasts on every continent. Nearly 2,000 products were featured and reviewed at the 2015 SEMA Show by a panel of top automotive journalists from countries around the world. Recipients were recognized in an evening program during the SEMA Show in Las Vegas, Nevada. 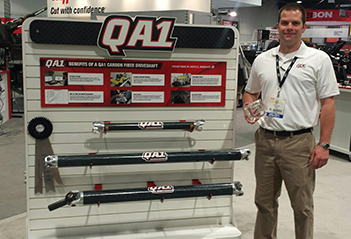 QA1 revealed several new products at SEMA, including drag racing and handling suspension kits and expansions of existing lines of shocks and suspension components that will be available in 2016. For more information on QA1’s new products, watch the new product videos at www.youtube.com/QA1tech.