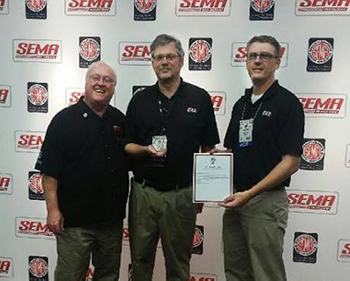 Lakeville, MN [November 12, 2014] – QA1, a leader in high-performance suspension components, has been honored with two SEMA Global Media Awards for its carbon fiber driveshafts and Mopar Rear Suspension Conversion System, both of which were recognized for their mass appeal to audiences around the world.

SEMA introduced the Global Media Award program in 2004 to highlight the wide appeal of specialty-equipment products to enthusiasts on every continent. Products are reviewed by a panel of 35 top automotive journalists from more than 20 countries around the world and recipients were recognized in an evening program during the 2014 SEMA Show in Las Vegas, Nevada.

QA1’s carbon fiber driveshafts, which are currently offered for street performance vehicles as well as dirt late models, are a major new offering from QA1’s Advanced Materials Division. These driveshafts are lighter, stiffer, stronger and safer than aluminum and steel driveshafts and are filament wound in-house using 3MTM Matrix Resin that is exclusive to QA1 performance driveshafts.

“QA1 is redefining industry standards by performing the filament winding in-house, which allows us to make carbon fiber driveshafts specific to each application,” said Travis Gorsuch, QA1’s Director of Advanced Materials. “We’re very excited for them to be recognized as a high-quality product that is relevant in multiple markets.”

The second Global Media Award for QA1 was for the Mopar Rear Suspension Conversion System, a revolutionary bolt-in conversion from leaf springs to coil-overs for Mopar A-Body vehicles. The system utilizes a 6-link suspension that builds upon the traditional 4-link system and replicates its geometry while still mounting to the existing chassis mount locations. 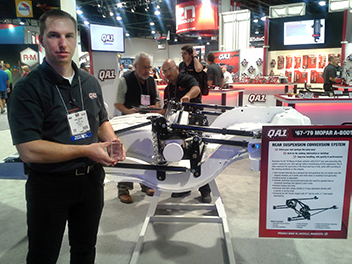 “It’s an honor to be recognized for this rear system,” said Karl Hacken, VP of Engineering at QA1. “We’ve put a lot of time into development so that it would be a practical bolt-in system, allowing it to be available to a wider audience that may not be comfortable cutting or welding on their vehicles. The awards are a testament to QA1’s emphasis on creating and producing performance-based products that have wide appeal.”

QA1 revealed 15 new products at SEMA, including expansions of existing lines as well as brand-new shocks and struts that will be available in 2015. For more information on QA1’s new products, watch the new product videos at www.youtube.com/QA1tech.